Hiraeth is a Welsh word that perfectly describes my yearning for the emotions I experienced around Christmases long past. I am not alone in my ‘hiraeth’, without prompting I hear the same yearning in the voices of people I meet on the street this time of year.

It is an ambiguous loss for a season that arrives each year without fail, earlier and earlier with less and less of what my heart is longing for.

I was decorating the tree last night when I came across  ‘Eagle with Santa hat’ and as I placed him on the tree it brought to mind an incident last summer that involved two mismatched birds. Their uneasy coexistence had caught my attention days earlier and I photographed them as they perched side by side in the pond in front of the house.

The Eagle is one of a pair whose nest can be seen from the house. Over the last ten years, I watched them raise their young, watched when despite all their careful tending, guarding and feeding they occasionally ‘lost’ one of the young eaglets before it could fledge. One year both eaglets were killed in the nest by a Golden Eagle and one of the pair was badly injured in the attempt to fend off the attack.

Enter the Crow……. the Scavenger and the Predator, these two are not ‘birds of a feather’ but with wonder and curiosity I  watched them ‘flock together’.  The Crow mercilessly dive bombs the Eagle from above when he is perched in the nesting tree but other than the occasional glance upward the Eagle seems unaffected by this constant annoyance.

Other than that, Eagle and Crow coexist peacefully enough, although the Eagle could easily do away with him with one movement of his powerful beak, he does not. The Crow always ensures he is above the talons that could make short work of him. There is a form of mutual respect between the two. 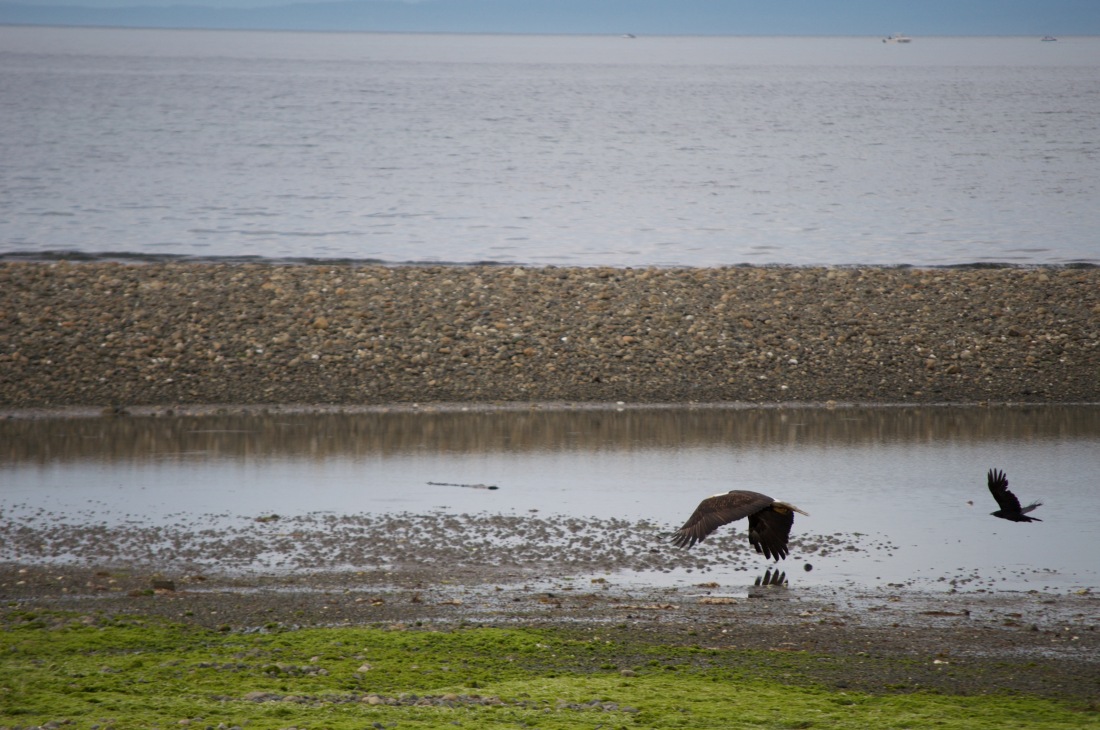 Perhaps that is what I’m feeling as I experience this homesickness for ephemeral memories of Christmas past. It is the slow erosion of mutual respect that is starting to permeate many parts of our human society. As a species, we appear to be on the verge of entering uncharted waters on many levels.

I have experienced a few ‘Christmas moments’ this year and as I look at the photograph below I realize that is probably what I am longing for. It is the fleeting moments of moving side by side with other human beings.  It is the bravery it takes to spread our wings without knowing what the future will bring, and the trust that it will hold us.

Mostly I feel it is sharing and respecting this exquisite little blue planet that we find ourselves on at this moment in time.  Instead of feeling sadness for a “home that maybe never was” I will go forward this year with gratitude for ‘what is’ and for this beautiful home that we all share.

A story or poem follows me around for a while, I write it down to get it out of my head and sometimes after rereading it seems universal enough that I hope it might also speak to someone else. At the end of this first year of blogging the one thing that has become clear is the photography and the writing seem to be morphing into one, the photograph being the muse for the words or the words for the photograph.....and then a quote I find from someone who had the talent to put what I am trying to say into a few precise sentences. View all posts by westcoastwoman

8 thoughts on “A HOME WHICH MAYBE NEVER WAS”