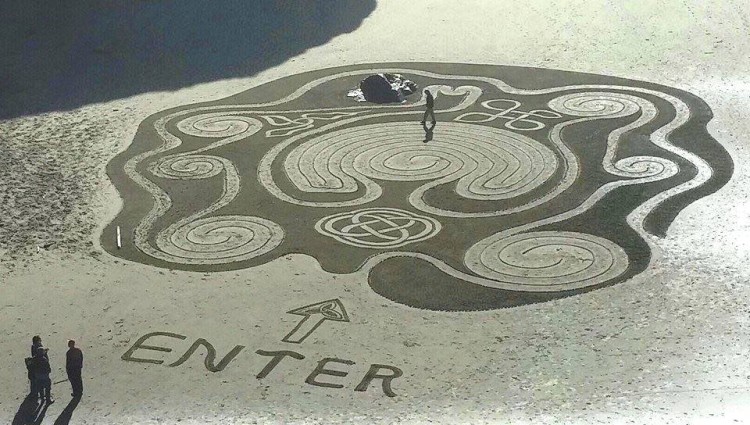 “Sometimes we plan a trip to one place, but something takes us to another”
Rumi

No one would have mistaken her for a leader, or perhaps she was a leader without any followers.  Her hair hung to her waist, the last foot of which was a tangled mass of dread locks and beads. The beads appeared to have been threaded in so long ago that any hope of retrieval would have had to involve scissors. Every inch of what remained from head to bead was dyed various shades of neon red, green and purple.

Her body was covered in exquisitely drawn and coloured tattoos enhanced by piercings that appeared on various exposed body parts. The finished effect resembled a moveable human art piece. If she had been a bird, she would have been a Macaw.

Our paths intersected when we both chose to attend a two-hour Labyrinth workshop that was offered as part of a weekend yoga symposium. I smile every time I think about the unlikely bond we forged when it all went ‘terribly wrong’.

For the uninitiated there is a difference between a Labyrinth and a Maze.  A Maze is designed as a problem to solve and a Labyrinth can be walked to solve a problem. Previous experiences walking a Labyrinth had revealed that there are points as you move forward where you have a sense you may have ‘taken a wrong turn’ or ‘lost your way’.  Trust the path even though you may feel lost and eventually you will spiral your way to the center  and out again with new insight.

Our group of ten was led to a large gym where a canvas Labyrinth had been assembled.  Encouraged to start walking it when we felt ‘called’ there was initial awkward glances and shuffling.  Sudden movement and a blur of color swept past; the Macaw had been ‘called’ she would be our leader.

I followed behind, gave her space and stepped forward… 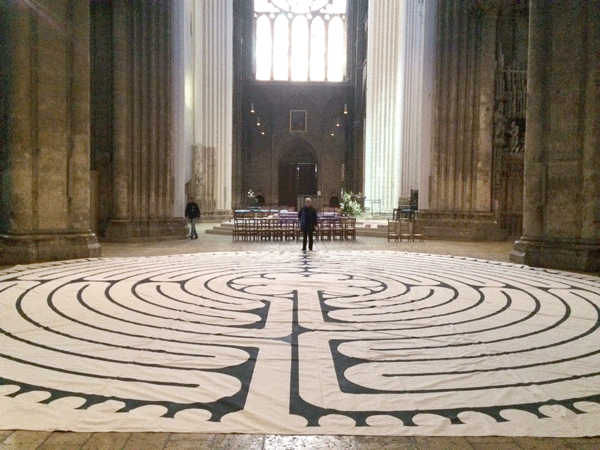 Having previously walked a Labyrinth alone or with one other person I was unprepared for the delicate dance of meeting and passing others on such narrow pathways.  This interaction became not just a metaphor for life but an enjoyable physical exchange. Approaching another person on an adjacent pathway would compel you to turn completely to the side, arms out, sometimes face to face other times turned away.  When three of us would intersect on parallel paths we all moved and turned in unison.

I was enjoying this immensely until I noticed a short distance ahead our ‘Leader’ had stopped unexpectedly and appeared confused. Coming up behind her I could see the dilemma, there did not appear to be ‘a clear path forward’.

With military precision she sized up the problem, the canvas Labyrinth was comprised of three pieces that were held together with velcro. The larger outer paths matched up but the center did not, it had been put together incorrectly.

She looked at me urgently  “We have to tear it apart, turn it around and start from the beginning.”  The Facilitator standing on the sidelines started to mumble things like “we don’t have time to fix it….. it takes a long time to assemble…..it is not my fault”….. the Macaw would have none of it. Taking orders from no one, she was now in charge and failure was not an option!

Without further instruction I followed her to the edge of the canvas where we found the points where the two seams met. The sound of ripping velcro filled the gym. The other participants moved in to help and within minutes we ripped it apart turned the center piece and reattached the seams.

The Macaw was now back in her rightful position at the entrance to the properly assembled Labyrinth. The dance this time as we turned and moved forward was that  much more joyful now that we knew we would be taken both in and out and to the all important center.

She and I parted that afternoon with a nod of mutual respect.  I caught a glimpse of her the following day as she flitted across the campus en route to another workshop.  Silently I bid her ‘safe travels’ it will be difficult for her to fly under the radar with such bright plumage.

Human error and the inability at some points to see and take action appears to be a frailty that may well be our undoing.  The planet we depend on for our survival is starting to wither with our demands that she give more and more with little given in return.
We appear to have lost our center.

There comes a point both personally and on a planetary scale that things appear ‘FUBAR’, to steal a military term my feathered friend would approve of…. when that point is reached the only solution to an obviously wrong course or path seems to be:

“Tear it apart, turn it around and start again from the beginning.”

And from there we will again find our Center.

A story or poem follows me around for a while, I write it down to get it out of my head and sometimes after rereading it seems universal enough that I hope it might also speak to someone else. One thing that has become clear is the photography and the writing seem to be morphing into one, the photograph being the muse for the words or the words for the photograph.....and then a quote I find from someone who had the talent to put what I am trying to say into a few precise sentences. View all posts by westcoastwoman

6 thoughts on “You can’t get there from here……”